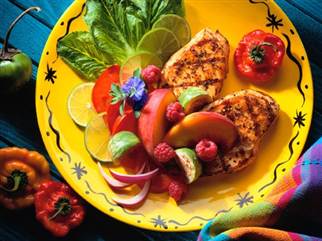 We’ve heard for years that a key to weight loss is swapping a few square meals a day for many mini-meals throughout the day. Now, a small but growing body of evidence is suggesting all that “grazing” isn’t necessarily a smart way to control your appetite. In some cases, it may even result in weight gain.

A small study presented this weekend at the American Diabetes Association conference found that people with type 2 diabetes who ate two large meals a day lost more weight than when they consumed six smaller meals with the same amount of calories.

The researchers, led by Hana Kahleova of the Institute for Clinical and Experimental Medicine in Prague, instructed the 54 study participants to follow two types of eating plans for 12 weeks each: either six mini-meals or two larger meals – just breakfast and lunch. Both diet regimens included the same nutrient and caloric content – the daily caloric total reduced each person’s intake by 500 calories. Half of the participants were provided with all of the meals, and registered dietitians regularly met with the volunteers.

The volunteers lost weight under both eating plans. But eating a big breakfast and big lunch resulted in more weight loss – 1.23 points of their body mass index, or BMI. Eating the six smaller meals resulted in a loss of 0.82 BMI points. BMI uses a person’s height and weight to provide a measure of body fat. A person of “normal weight” has a BMI between 18.5 and 24.9; The average BMI for participants in this study was 32.6.

Though the study was presented at the ADA conference, it’s important to note that it’s not yet been published in a peer-reviewed journal — and 54 patients makes for a small sample size. Although eating just two times a day resulted in more weight loss, is skipping dinner really feasible or sustainable for the average American — with or without diabetes? Not likely, experts who weren’t involved with this new research say.

“National surveys suggest that most Americans, including those with diabetes, eat five or six times a day, so to curb eating to only two times a day would be a change that would be drastic and dramatic — and unrealistic for many people,” says Elisa Zied, a registered dietitian from New York.

Toby Smithson, a spokesman for the Academy of Nutrition and Dietetics, adds that eating two large meals a day is impractical because for many, dinner is the one meal that they’re able to reliably fit into their schedule. She says, “Specifically for people with diabetes, with the mechanics of our body, it is best to spread out the doses of glucose … throughout the day.”

But Madelyn Fernstrom, TODAY’s diet and nutrition editor, says that the real-life takeaway here is less about skipping dinner, and more about simply eating less frequently. “An earlier study showed that if you ate three times a day, you got the same thing. So it’s really cutting down how often you eat, because you’ll tend to eat less,” Fernstrom told Savannah Guthrie this morning on TODAY.

“Three meals a day is going to be more workable,” Fernstrom says. “When you translate it to real life, this could be a good way to go – hearty breakfast, medium lunch, and then a lighter dinner. Or you can mix and match, as long as you keep the calories low.” Because remember, in this study, the dieters’ daily calorie counts were cut by 500 a piece – something that Fernstrom says can translate to about a pound lost a week.

Because moving away from “grazing” — constantly grabbing something to eat during the day the minute you feel the slightest twinge of hunger? That’s something many dietitians can get behind. And the medical literature supports that idea, too, as past research has suggested that eating more meals throughout the day does not necessarily result in more weight lost.

“What I think this says is that grazing all day long may not be the best,” Fernstrom says. “A lot of people think, if I want to lose weight better, I’d better spread my meals out, eat constantly. But the more you graze, the more you tend to eat, for many people.”

“These six mini meals turn into six major meals, and people wonder why they’re not losing weight,” she told TODAY. “So this is really good documentation, even though it’s a small study, that eating less often can really help promote the same weight loss.”

For long-term weight management, it’s important to learn to listen to your body. Zied’s rule: Eat when you’re hungry, stop when you’re satisfied, and plan ahead.

But perhaps most importantly: know what works for you, and choose an eating strategy that you can really, actually stick to. That’s something Robert Ratner, chief scientific and medical officer for the ADA, says is so important in treating diabetes patients — or anyone interested in losing weight.

“There are some people who, if you gave them the option of six meals a day, would overeat at all six meals. There are others who actually find grazing like that quite easy, so they’re never so hungry that they consume large quantities. On the other hand, we all know people who miss meals,” Ratner told NBCNews.com.

“One of the take home messages here — a 500-calorie reduction in intake, regardless of how you do it, results in weight loss,” Ratner says, adding that “both groups lost weight. This shows that calorie reduction matters.”

Two meals a day may be better for weight loss than ‘grazing’
We’ve heard for years that a key to weight loss is swapping a few square meals a day for many mini-meals throughout the day. Now, a small but growing body of evidence is suggesting all that “grazing” isn’t necessarily a smart way to control your appetite. In some cases, it may even result in weight ...

0
User Rating: Be the first one !
0
2013-10-25
admin
Share !
Previous: Every minute of physical activity really does count, new study shows
Next: FDA seeks tighter control on prescriptions for class of painkillers