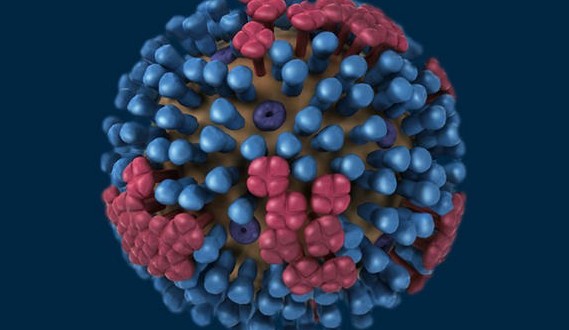 A brand new flu virus has been found in Peruvian bats, according to a new study from researchers at the Centers for Disease Control and Prevention.

The virus, called A/bat/Peru/10, belongs to a family of flu viruses known as influenza A, which mainly infect birds, but can also infect other animals, including people.

Influenza A viruses are named for two proteins on the virus’ surface, hemagglutinin (H) and neuraminidase (N), such as H1N1. Previously, there were 17 known types of H proteins and 10 known types of N proteins. But the proteins on the surface of A/bat/Peru/10 are so distinct, that the researchers designated it a new virus: H18N11. [10 Deadly Diseases That Hopped Across Species]

Tests done by the researchers so far suggest the virus is not an immediate concern for people, said study researcher Ruben Donis, associate director of Policy, Evaluation and Preparedness at the CDC’s Influenza Division. The researchers have not been able to grow the virus in human or primate cells, or by other methods, which is characteristic of viruses that do not infect humans, Donis said. The virus may have very specific requirements for growth, for instance it may only be able to replicate in the intestinal cells of bats, he said.

On the other hand, the researchers do not have enough information to say for sure that the new flu virus cannot eventually infect people, Donis said.

Last year, the same group of researchers identified a distinct influenza A virus, H17N10, in fruit bats living in Guatemala.

So far, flu viruses from bats are not known to infect people. But bats are known reservoirs for other types of pathogens that have found their way to humans, such as Severe Acute Respiratory Syndrome. Bats are also are suspected to be the original source of the virus causing the current outbreak of MERS.

Bats also provide a host for flu viruses to undergo genetic changes. The study found a high amount of genetic diversity among flu viruses in bats, indicating that flu viruses have evolved in bats for a very long time.

For some flu genes, “New World bats harbor more influenza virus genetic diversity than all other mammalian and avian species combined,” the researchers wrote in the Oct. 10 issue of the journal PLOS Pathogens..

The researchers found the new virus after testing samples from 114 bats in Peru. One sample, from a flat-faced fruit bat known as Artibeus planirostris, was found to have H18N11. Blood testing of other bats suggested that they may have been infected with H18N11 in the past. The researchers still do not know how H18N11 attaches to cells to enter them.

New Flu Virus Found in Peruvian Bats
A brand new flu virus has been found in Peruvian bats, according to a new study from researchers at the Centers for Disease Control and Prevention. The virus, called A/bat/Peru/10, belongs to a family of flu viruses known as influenza A, which mainly infect birds, but can also infect other animals, including people. Influenza A ...