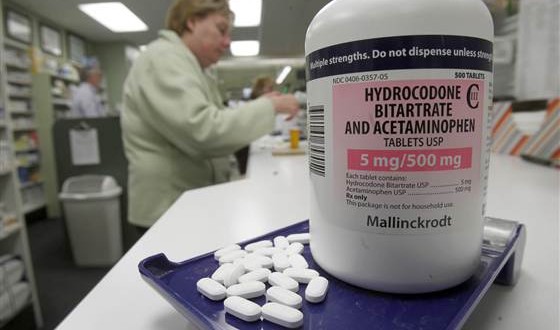 The Food and Drug Administration on Thursday recommended tighter controls on how doctors prescribe the most commonly used narcotic painkillers.

The move, which represents a major policy shift, follows a decade-long debate over whether the widely abused drugs, which contain the narcotic hydrocodone, should be controlled as tightly as more powerful painkillers such as OxyContin.

The drugs at issue contain a combination of hydrocodone and an over-the-counter painkiller like acetaminophen or aspirin and are sold either as generics or under brand names like Vicodin or Lortab. Doctors use the medications to treat pain from injuries, arthritis, dental extractions and other problems.

The change would reduce the number of refills patients could get before going back to see their doctor. Patients would also be required to take a prescription to a pharmacy, rather than have a doctor call it in.

Dr. Janet Woodcock, director of the agency’s center for drug evaluation and research, said she expected the new regulations could take effect as early as next year. The recommendation requires the approval of the Department of Health and Human Services and adoption by the Drug Enforcement Administration, which has been pushing for the measure.

For years, F.D.A. officials had rejected recommendations from the D.E.A. and others for stronger prescribing controls as a way to curb abuse of the drugs, saying the action would create undue hardships for patients. A number of doctors’ groups, including the American Medical Association and pharmacy organizations, have continued to fight the measure, citing the impact on patients.

In a telephone interview, Dr. Woodcock said that F.D.A. officials were aware that changing the prescribing rules would affect patients. She said, however, that the impact on public health caused by the abuse of the drugs as well as their medical use had reached a tipping point.

The new regulations would reduce by half, to 90 days, the supply of the drug a patient could obtain without a new prescription.

Currently, a patient can refill a prescription for such drugs five times over a six-month period before needing a new prescription.

“These are very difficult tradeoffs that our society has to make,” said Dr. Woodcock. “The reason we approve these drugs is for people in pain. But we can’t ignore the epidemic on the other side.”

Concerns continue about the huge number of overdoses involving prescription painkillers as a result of a boom in the use of such drugs over the last decade. Drugs containing hydrocodone frequently make their way onto the street, in part because they are easier to obtain than other narcotics.

The F.D.A. recommendation could have a significant impact on the availability of the drugs.

In 2011, about 131 million prescriptions for hydrocodone-containing medications were written for some 47 million patients, according to government estimates. That volume of prescriptions amounts to about five billion pills.

Technically, the change involves the reclassification of hydrocodone-containing painkillers as “Schedule II” medications from their current classification as “Schedule III” drugs. The scheduling system, which is overseen by the D.E.A., classifies drugs based on their medical use and their potential for abuse and addiction.

Schedule II drugs are those drugs with the highest potential for abuse that can be legally prescribed. The group includes painkillers like oxycodone, the active ingredient in OxyContin, methadone and fentanyl as well as medications like Adderall and Ritalin, which are prescribed for attention-deficit hyperactivity disorder, or ADHD.

In recent years, the question of whether to tighten prescribing controls over hydrocodone-containing drugs has been the subject of intense lobbying.

Last year, for example, lobbyists for druggists and chain pharmacies mobilized to derail a measure passed in the Senate that would mandate the types of restrictions that the F.D.A. is now recommending.

At the time, the lobbying arm of the American Cancer Society also said that making patients see doctors more often to get prescriptions would impose added burdens and costs on them.

Senator Joe Manchin III, Democrat of West Virginia, expressed dismay when the proposal died in the House of Representatives.

“They got their victory – but not at my expense,” said Mr. Manchin, whose state has been hard hit by prescription drug abuse. “The people who will pay the price are the young boys and girls in communities across this nation.”

Dr. Woodcock, the F.D.A. official, said that requiring patients with long-lasting pain to see a doctor after three months, rather than six, to get a new prescription could benefit them.

“If you are needing chronic therapy of this magnitude, you should be seeing your prescriber,” she said.

Earlier this year, an expert advisory panel to the F.D.A. voted 19 to 10 in favor of reclassifying hydrocodone-containing painkillers as Schedule II drugs. While such recommendations are not binding, the agency often follows them.

Along with changing how doctors prescribe these drugs, the classification change will also impose added storage and recordkeeping requirements on druggists. In some states, nurse practitioners and other health care professionals who can currently prescribe hydrocodone-containing drugs may no longer be able to do so.

FDA seeks tighter control on prescriptions for class of painkillers
The Food and Drug Administration on Thursday recommended tighter controls on how doctors prescribe the most commonly used narcotic painkillers. The move, which represents a major policy shift, follows a decade-long debate over whether the widely abused drugs, which contain the narcotic hydrocodone, should be controlled as tightly as more powerful painkillers such as OxyContin. ...

0
User Rating: Be the first one !
0
2013-10-25
admin
Share !
Previous: Two meals a day may be better for weight loss than ‘grazing’
Next: What causes coronary heart disease?