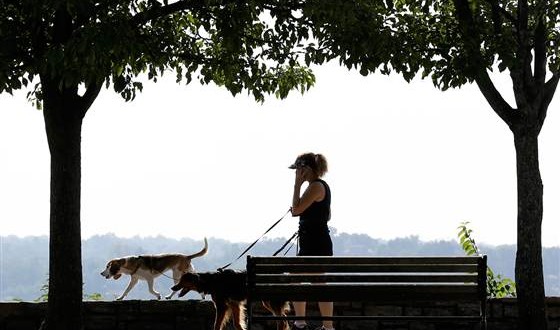 A new study suggests something encouraging for busy people: Every minute of movement counts toward the 150 minutes of moderate-intensity physical activity we’re all supposed to be getting each week. University of Utah researchers found that each minute spent engaging in some kind of moderate to vigorous physical activity was associated with lower BMI and lower weight.

OK, that seems kind of obvious. But according to the current physical activity national guidelines, “aerobic activity should be performed in episodes of at least 10 minutes,” and the everyday stuff, like walking the dog or climbing a flight of stairs, “aren’t long enough to count toward meeting the Guidelines.” This new paper, published today in the American Journal of Health Promotion, suggests that reaching those two and a half hours minute by minute is just fine.

“The idea here is, you can do a minute at a time and that’s not a problem,” says Jessie Fan, lead author of the new paper and a family and consumer studies professor at the University of Utah.

For the women studied, each minute spent in higher-intensity, moderate to vigorous activity was associated with a .07 drop in body mass index, a measure of fat based on height and weight. For a 5’4″ woman, that means a drop in weight of nearly half a pound. The effect in the guys was a little less substantial: a minute of exercise was associated with a .04 drop in BMI, translating to a .27-pound drop in weight for a 5’8″ guy. That doesn’t sound like much, and it isn’t on its own – but that’s just one minute, points out Miriam Nelson, a nutrition science professor at Tufts University who was on the committee that put together the 2008 Physical Activity Guidelines for Americans. Multiply that by 10, or 30, or 150, and you’ve got some real results – all achieved by teeny tiny bouts of high-intensity activity.

“High intensity,” Fan says, essentially means moving with a little pep, enough to get your heart rate going: it’s not sprinting or racewalking, for example, but it’s not ambling down the sidewalk, either.

“I think it’s easier for people to process that message,” Fan says. “Otherwise, if they don’t have a block of time they might be discouraged, and they don’t do anything.”

Fan and colleagues gathered their data using the National Health and Nutrition Examination Survey, a research program that uses interviews and physical exams to track the health of a diverse selection of American adults and children. For this study, researchers gathered the BMI and weight of 4,511 adults ages 18 to 64, and compared that to their physical activity level, which was tracked by an accelerometer, a device that measures movement.

The results, experts say, lend some numerical evidence to the idea that “every minute counts.”

“Time is precious,” says Michael Mantell, Ph.D., a behavioral science expert with the American Council on Exercise. He says the “all or nothing” approach – as in, “If I can’t work out for an hour at the gym, why bother at all?” – is an excuse that too often keeps people from doing any sort of physical activity. “This study identifies why that belief is inaccurate.”

Mantell has, oh, about a thousand ideas to put this idea into practice: You could energetically clean the house while listening to peppy music, or go outside to wash and wax your car. In the kitchen, you could chop veggies, wash dishes or stir batter by hand instead of with an electric mixer. On your way to work or while doing errands, get off the bus or subway a stop earlier than normal, or park a little farther away from the store. At home, play with your kids or grandkids, push the baby in the stroller, or walk the dog.

0
User Rating: Be the first one !
0
2013-10-25
admin
Share !
Previous: People think they’re eating less than they are, survey finds
Next: Two meals a day may be better for weight loss than ‘grazing’