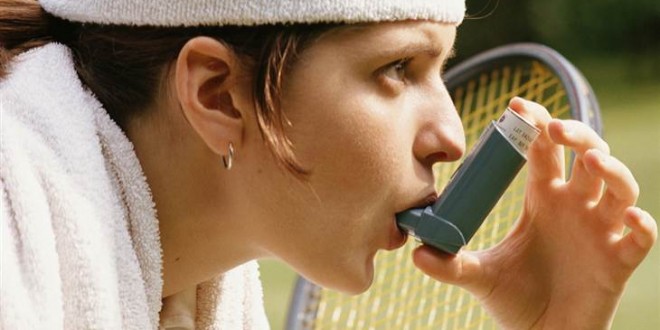 Can some asthma patients skip the daily inhaler?

Just about everyone with asthma knows the drill. Take a daily snort of a prescription inhaler filled with a steroid that helps fight inflammation, to prevent trouble. Not everyone actually does this, but patients with mild, persistent asthma know they are supposed to.

A study published on Tuesday questions this common wisdom, and offers the potential for millions of adults to be freed of having to take daily medication, not to mention the savings to patients, their employers, health insurance companies and the government. Caveat: The findings don’t apply to kids with asthma.

“Daily treatment with an inhaled corticosteroid has long been believed to be the best treatment for mild persistent asthma, but it is not followed by the majority of patients,” said Dr. Homer Boushey of the University of California San Francisco, who worked on the study. Boushey also helped the National Institutes of Health set guidelines for managing asthma.

“People don’t seem to like taking this type of treatment every day — just a third of the inhaler prescriptions are renewed even once,” Boushey said. “So we wondered what would happen if people with mild asthma already well controlled by daily treatment with an inhaled corticosteroid instead took a puff only when they used their rescue medication — usually albuterol — for relief of symptoms.”

The researchers at 10 different universities studied 342 adults with moderate, persistent asthma. It was a small number of patients but an intense study, because the researchers assigned the volunteers to one of three different treatments: Being checked by a doctor and having the inhaler adjusted as needed every six weeks; getting checked and having the inhaler dose adjusted based on a measurement of exhaled nitric oxide, which tells doctors how much inflammation there is in the airways; or allowing patients to adjust their own inhaler use based on symptoms and taking one puff of their inhaled corticosteroid for every puff of albuterol.

In this case, the patients all got beclomethasone, a corticosteroid sold under a variety of brand names such as Qvar, Beconase, Beclovent or Vanceril. Other drugs in this category include fluticasone, sold under the brand name Flovent; budesonide, sold under the Pulmicort brand; mometasone or Asmanex and ciclesonide or Alvesco.

These drugs control the inflammation that can swell up airways, making it harder to breathe.

None of the groups fared any better or worse than the others. On average, they had the same number of flare-ups and symptoms, the researchers report in this week’s issue of the Journal of the American Medical Association.

“Asking patients to take their inhaled steroids only when they had symptoms was just as effective as having them take it every day and just as effective as having them take it using very sophisticated monitoring of inflammatory mediators in the airway,” Dr. William Calhoun of the University of Texas Medical Branch, who also worked on the study, said in a video commentary. “So the simple question ‘how are you doing and are you having symptoms’ is just as good as sophisticated methods of adjusting corticosteroids.”

“This approach allows personalization of treatment and is easy for patients. Also, it could hypothetically result in saving $2 billion a year in medication costs,” Boushey added.

About 25 million Americans, or 8 percent of the population, have asthma, according to the U.S. Centers for Disease Control and Prevention. It’s more than an annoyance. CDC says asthma killed 3,447 people in 2007. It costs the country about $3,300 per patient, for a total bill of $50 billion in 2007.

More than half of children and a third of adults who had an asthma attack missed school or work because of it in 2008.

In a commentary, Dr. George O’Connor of Boston University and Dr. Joan Reibman of New York University said it would save a lot of patients the inconvenience of having to take a drug daily if the results bear out in more study. But they said it’s too early to change the guidelines just yet. “There is no compelling rationale to alter the current approach to inhaled corticosteroid dosing for mild or mild to moderate persistent asthma,” they wrote.

Can some asthma patients skip the daily inhaler?
Just about everyone with asthma knows the drill. Take a daily snort of a prescription inhaler filled with a steroid that helps fight inflammation, to prevent trouble. Not everyone actually does this, but patients with mild, persistent asthma know they are supposed to. A study published on Tuesday questions this common wisdom, and offers the ...

0
User Rating: Be the first one !
0
2013-10-25
admin
Share !
Previous: Sinus problems? A dose of ‘good’ bacteria may help
Next: Afternoon slump? How to have more energy all day long